I'll take a detour from my regular musings to stop to talk a bit about one of the things I take a little too seriously, music >.<

To be more precise, I want to talk about an album which I honestly believe should be getting more recognition and airplay that it actually is getting. That album is the second album by The Script, Science & Faith. 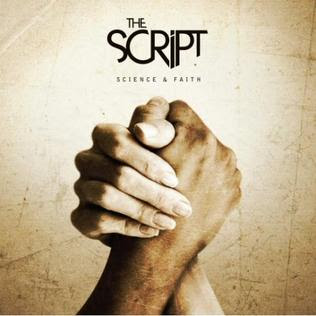 The thing I probably like the most about The Script is their lyrics. The feel of this album is a lot more mainstream than their previous album (departing from the previous albums fast-paced raps in favour for more traditional verses) but nevertheless, it still hold true to the lyrical genius that is The Script. The song verses are more akin to poetry verses, packed full of literary goodness to help drive home the album's concept of the darker, more unfortunate depiction of love (and love lost). Every song in this album is well written, filled with smart puns, metaphors and rhymes. The pacing of the songs are also written with purpose, driving home each chorus like a slap to the face or a big fat full stop after long prose. The album as a whole almost feels like a concept album of a single couple more than a string of stories about love, with each track flowing from to another flawlessly through the album's expose of 'could-have-been' stories.

My picks from this album are For The First Time, Nothing, Science & Faith and Exit Wounds, each for their own particular reasons. For The First Time is a nice track mostly because it's one of the 'happier' tracks in the album, letting the listener immerse themselves feel of how love could overwrite all of the troubles in the world. This is immediately juxtaposed by it's succeeding track, Nothing. Nothing is another of my personal favourites more because of the pacing and the writing of the song. Nothing delivers killer verses with the breaks in between aiding to add to the impact of the lyrics. Science & Faith on the hand is probably my favourite song from the entire album because it is the best sounding song. The backing track for this song is the most sonically pleasing from the album and the verses also perfectly embody the conflict between man of science and the woman of faith and emotion with a killer chorus to score the homerun. Exit Wounds is my final album pick for it's impressive use of imagery, drawing analogies between a victim of a gunshot and a victim of love. The sheer cleverness of the lyrics helps the listener to see the music more than hear it, serving as a perfect conclusion to an equally awesome album.

The only downside to this album (and the band in general) is that aside from it's amazing songwriting, the execution of the album is a little more than average. The vocalist is by no means spectacular and the guitarist and drummer are as average as any other bands'. Nevertheless, the true selling point for the band has always been their lyrics. So if you long for an album which you can listen to while nitpicking the nuances of its writing, don't hesitate to give this album a spin or two.

Email ThisBlogThis!Share to TwitterShare to FacebookShare to Pinterest
Labels: Music